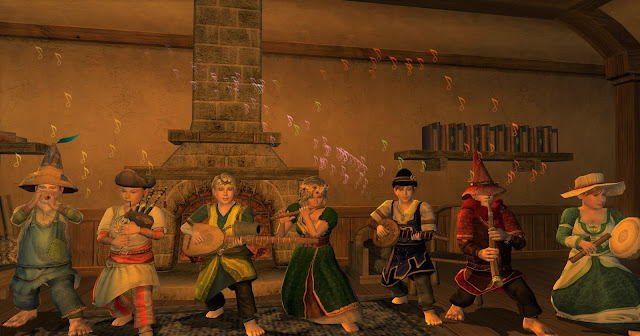 I have also written a few songs for my solo performances or for our kinship band, the Brandy Badgers, in LOTRO. The music system works like this: first, we make an ABC file, usually based on a midi file. An ABC file may contain multiple parts, covering all sorts of instruments like the lute, clarinet, bagpipes and drums, to name a few. To make things easier, the ABC file will be played in-game using a specific plugin. If you have lyrics for the song, you can "sing" them during the song using another plugin. The other players can see the lyrics hovering over the singer's head. If you want to take a look, you can see a clip of the Badgers performing a song here.

Here is a list of my songs in alphabetical order. The original song is in brackets.